I always had an idea of what a hammam (better known as a Turkish bath) was: an old Ottoman tradition of communal bathing. After moving to Canada, the idea morphed into a capitalistic luxury for the “real housewives of x, y, z”. Do you smell cultural appropriation or is that just me…? 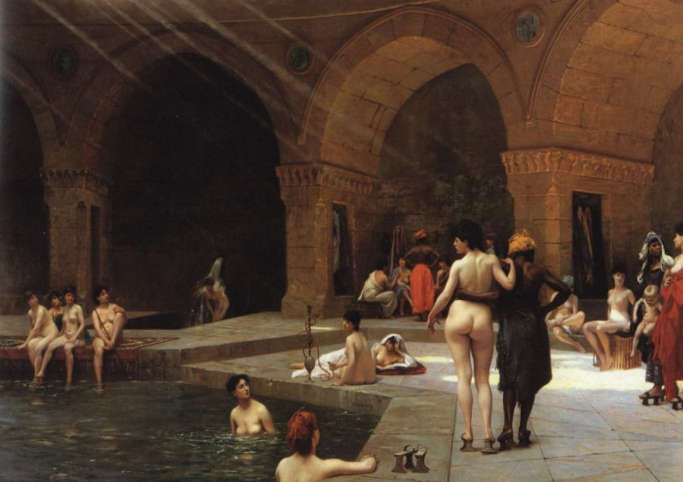 I’d seen many oriental paintings of exoticized women lounging in hammams in museums and history textbooks. Let’s not forget the movies with big sweaty men who outgrow their towels (I’ll retain from posting those images here). 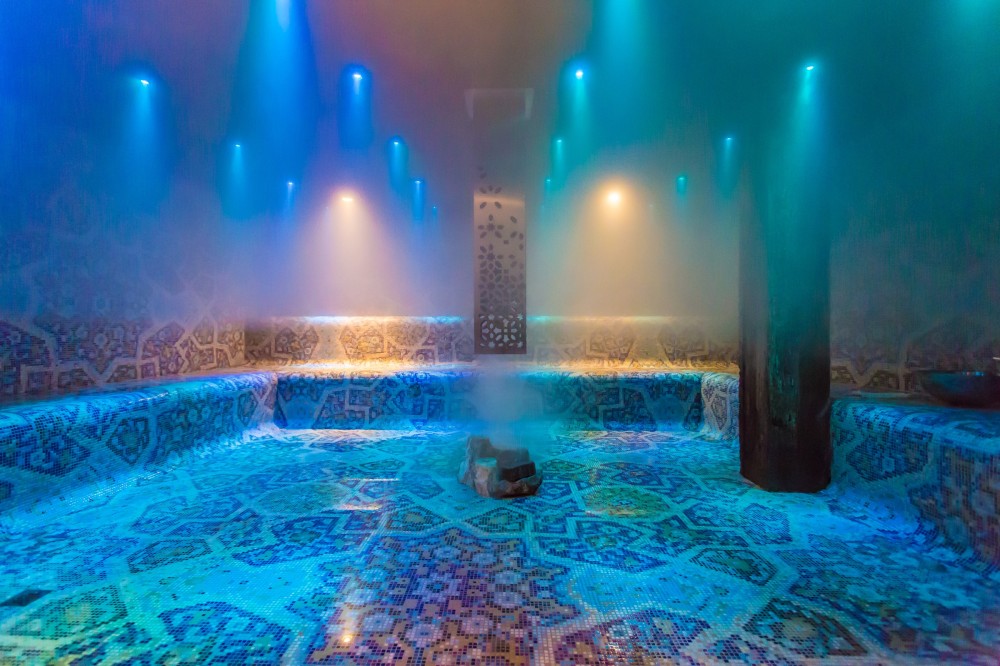 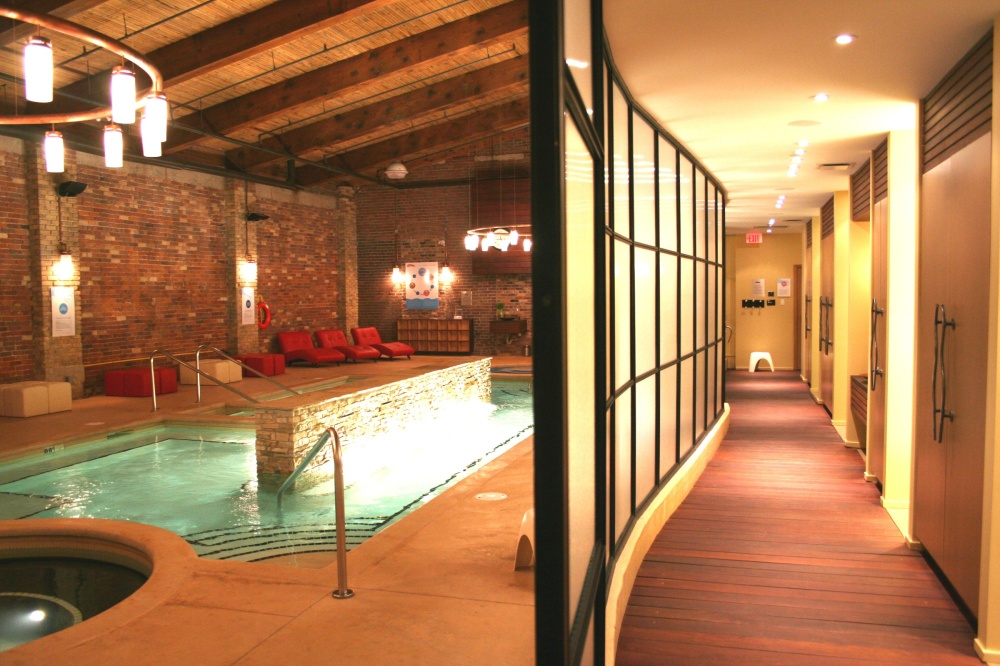 Then there is the obscure Western version of hammams with pools, maids, candles, massages, manicures, drinks, etc., a little much for a bath, no? The Hammam Spa in Toronto above is a good example.

Being fluent in curiosity, I ached to investigate a traditional Tunisian hammam. 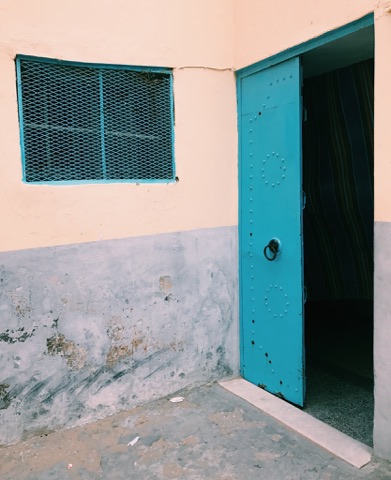 I was unable to attend a hammam in Istanbul due to some time constraints but when we accidentally passed by one in the old port of Bizerte, Tunisia, I was all in. 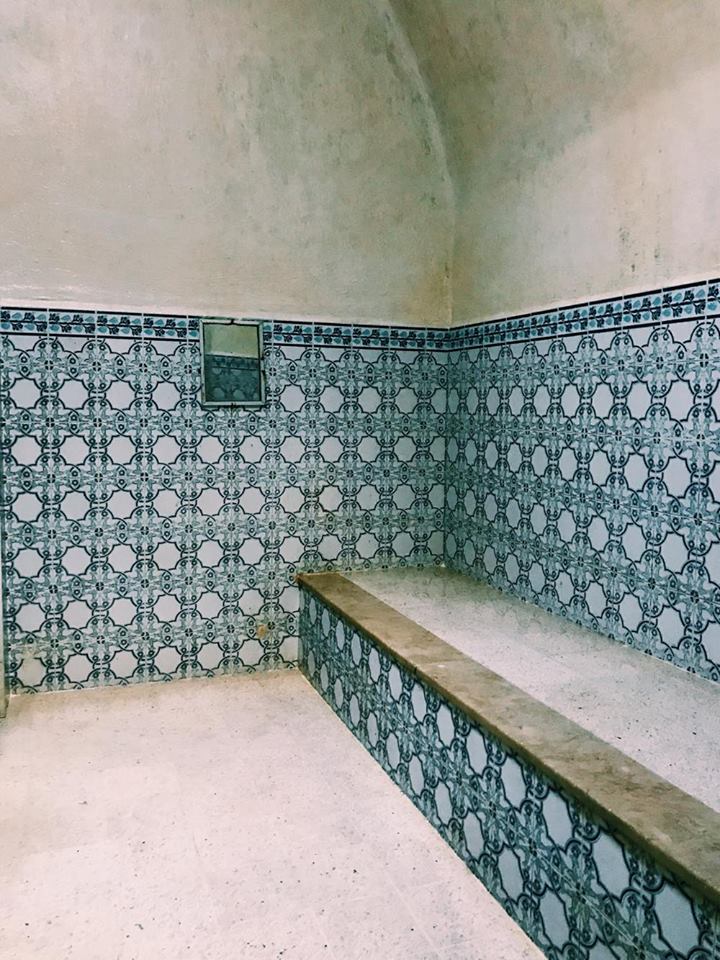 A hammam starts with relaxation in a room (known as beit skoon) that is heated by a continuous flow of hot, dry air, allowing the bather to perspire freely. Later, the bathers can move to an even hotter room before they wash in cold water. 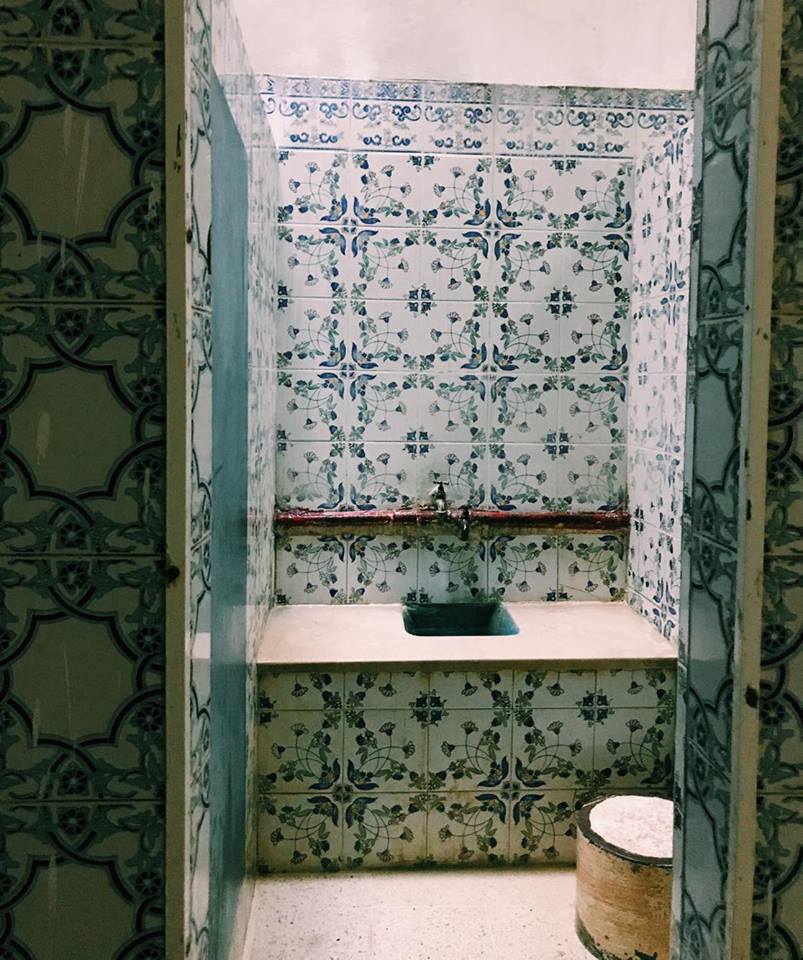 After performing a full body wash and receiving an optional massage, bathers retire to the cooling room for a period of relaxation.

Hammams in the Islamic context:

It is customary before praying for Muslims to perform ablutions. The two Islamic forms of ablution are ghusl, a full-body cleansing, and wudu, a cleansing of the face, hands, and feet with water. Often, hammams are located close to mosques and other places for prayer for those who wish to perform a deeper cleansing. With time, the practice has become a part of the culture in many Muslim countries, especially in winter. Newlywed couples and people who’ve come back from long travel traditionally visit hammams.

I tried to push all expectations and assumptions behind for this one and do exactly what my friend’s Tunisian mother had explained.

Before leaving, we packed a carryon suitcase, more than I pack for some weekend trips, consisting of everything from fresh clothes and toiletries to towels, a rug, a fouta (a wrap to wear in the hammam), a tasa (to pour water with), and tfal (a clay-like soap).

So here’s the deal, the hammam was everything I didn’t think it’d be and more, in a good way. Nonetheless, it corrected a lot of myths I had about communal bathing and I hope after reading this, you also give a traditional hammam a try on your travels. 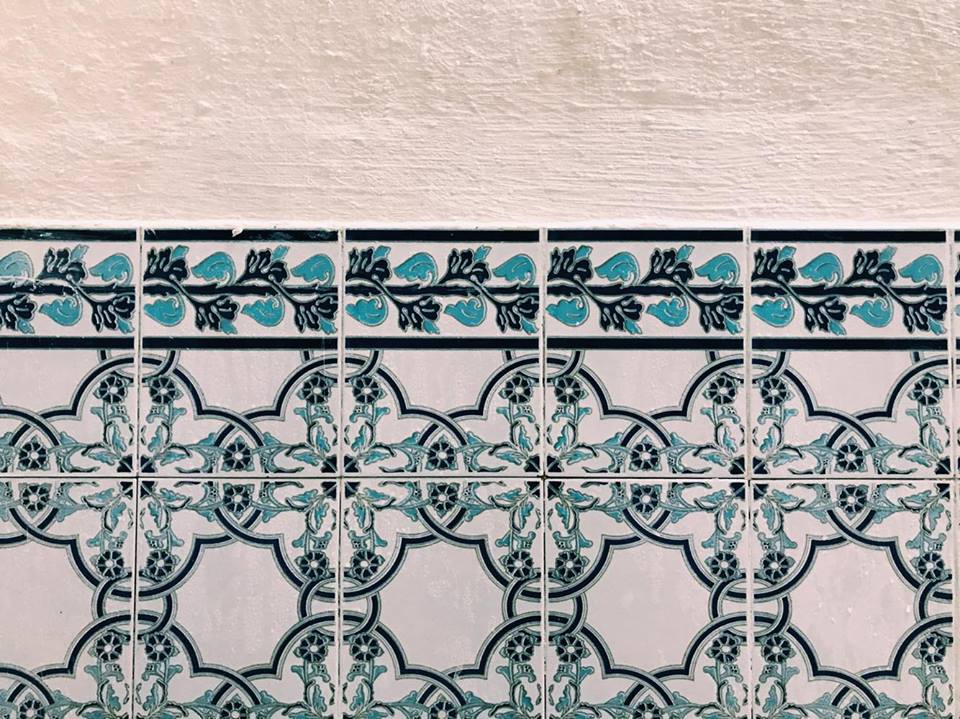 Despite the Western stereotype of hammams being super fancy, the traditional ones for everyday people really aren’t. The tunnel pathways lead to empty rooms and water stations. However, I will give credit to the beautiful blue tile work that unifies the place. We really need to start appreciating blue tiles more. 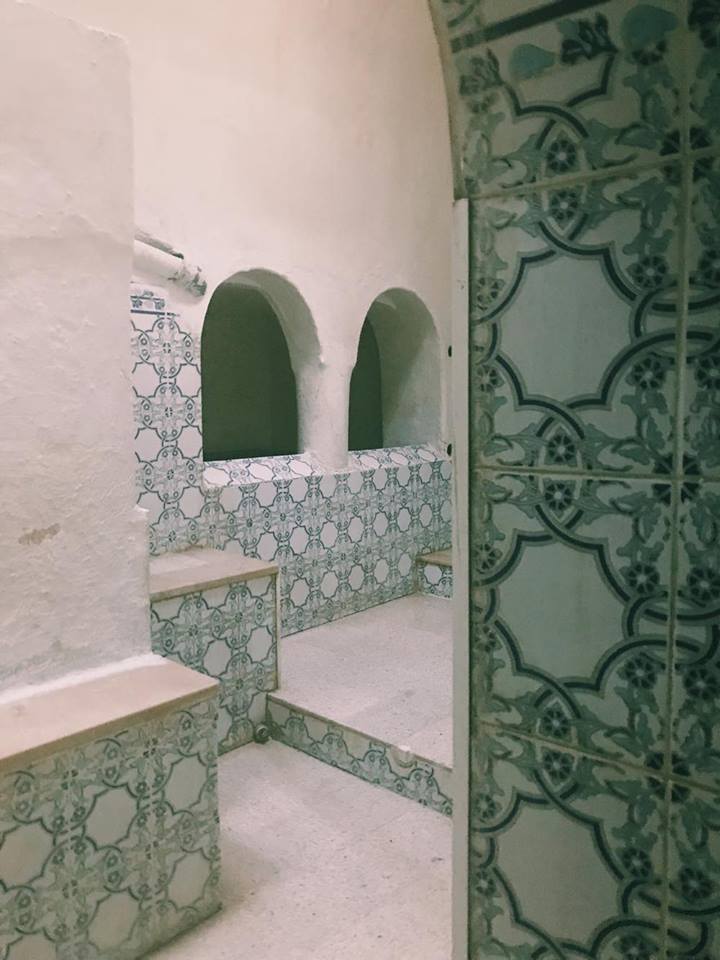 You sit on the bench with all the other regular people and do your thing. There is no extra soap or any of the scented candle BS. You’re there to get clean and that’s what you’re going to get. 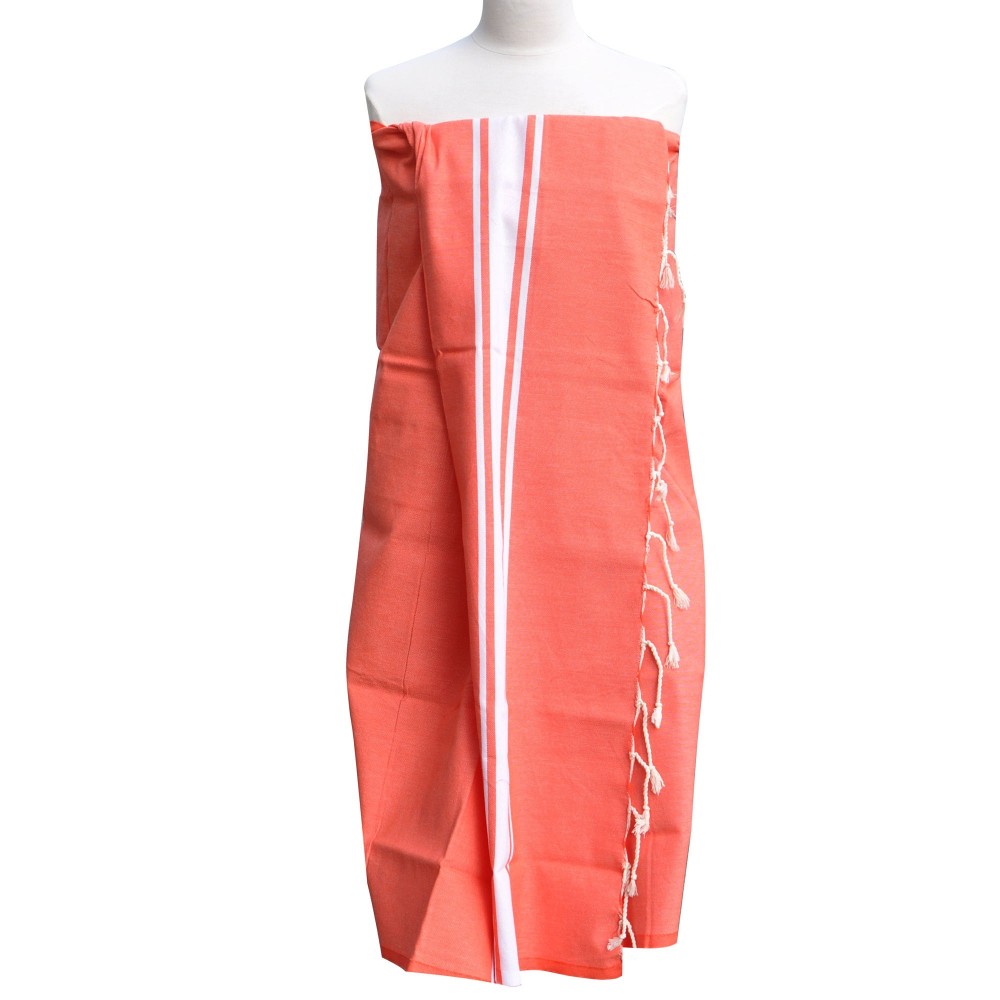 Before entering, women change into a fouta which covers you from chess to your knees. I felt super embarrassed when I realized you’re still supposed to keep your underwear on. Even if it is women’s hours at the hammam, you cannot be completely naked.

I thought I’d be on another planet after this, turns out moms bring their kids and there is gossip in the dry flog right to left. Hammam can be a family thing or a girls night out. When you get your girls in a room, you know there’s going to be talk about the cute guy Mariam’s sending memes too. 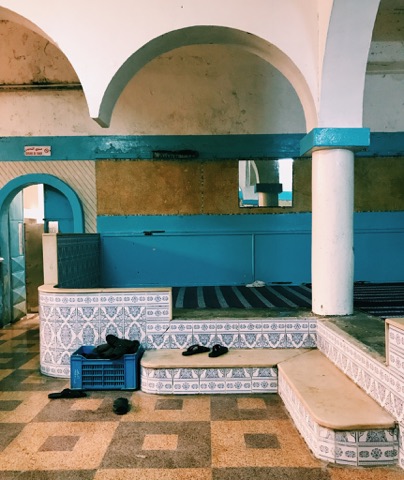 I was a little hesitant to ask my friend to go with me because I didn’t think it could fit into our budget. To my surprise, it was pretty cheap: 3-4 Tunisian dinars ($2.00 CAD) for as long as you like. Thanks, you can find me talking an 8-hour nap in bait skoon. On a serious note, most people go to a hammam as often as once a week during certain seasons so it seems crazy for it to be costly. 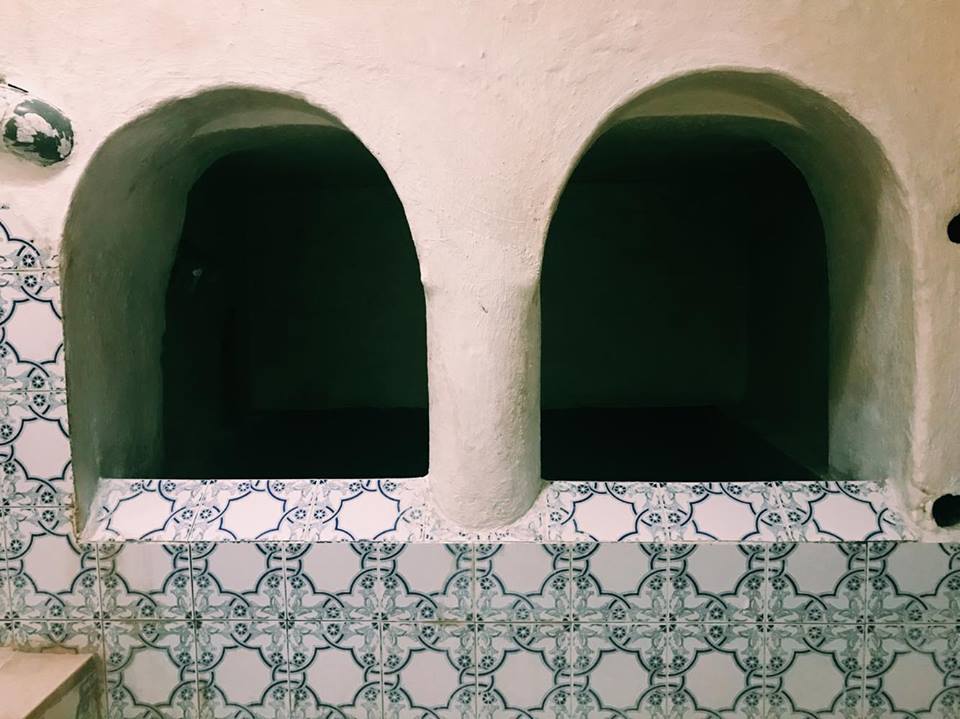 The women who work there are constantly cleaning. I’d never seen anything like it. Sure there were a few cracked tiles here and there, but everything shone. Let’s just say that I’d eat off it, it was that clean.

Myth # 6: The scrub massage is optional

When we got there, I saw a lady giving another bather a scrub and I thought no way am I doing that. After my friend got her back scrubbed and I saw how much dead skin had come out, I agreed. She was almost my grandmother’s age but she seriously knew her way. After she was finished, I wished I’d asked her to do my full-body. Keep in mind, you must tip her because the price for the hammam doesn’t include her salary.

Myth # 7: No one cares about your extra tummy fold(s)

Perhaps my favorite thing about going to this hammam was that no one cared about what I looked like. I felt super comfortable in my skin because I saw others doing the same. These were real women; daughters, mothers, professionals, and they proudly let their stretch marks and extra skin flow. I felt 5 lbs lighter when I got out.

Tip: Don’t make plans to do things after the hammam, trust me, you’re going to need a serious nap.

Note: This was an averagely sized hammam for middle-class Tunisians. Other hammams may vary.